The Call of the Pipes 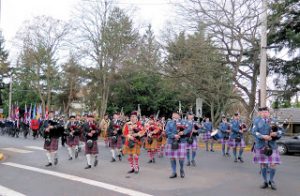 There’s something about bagpipes that stirs the soul. Why else account for their use in battle?  Soldiers, tired, defeated, and frightened, will rise from their cover and follow the piper one more time into the fray.  Over and over in history, that scenario has played out.  One notable example is Canada’s VC winner, James Richardson. I’ve written about him here.

Recently, at a Remembrance Day service at our local cenotaph, I watched the pipe band marching past and felt the excitement race through my veins, but when I watched closely, I did a double-take. I had always believed those blowing the bagpipes were male members of Scottish clans. Not this time.  The band I saw had an Asian man, a black man, and a few women, wearing kilts, and proudly piping out “Scotland the Brave.” Welcome to Canada in 2017.

“That would never happen.” These dismissive words have blighted more than one budding writer’s career.  Even when the event in question is a true-life example, the editor or beta reader insists it is too far-fetched to be used in fiction.  Book guidelines say the editor is looking for something “new and different.”  The invisible subtext likely reads but not too different.

Publishing is a risky business, so publishing houses like to hedge their bets. If book A about a shape-shifter sold lots of copies, then they want more shape-shifters.  If book B about a werewolf tanked, they don’t want to see werewolves anywhere in your submission.

If you are writing something “different” don’t be discouraged. Remember someone had to be the first to write vampires, or steam-punk, or aliens, or a small-town knitting story.  And “real life” does give us some wacky examples of the non-probable. Like my pipe band, “different” but great!

Today, when “diversity” is all the rage, maybe a female of Chinese descent with a passion for bagpipes could be a captivating heroine. Or a male soldier returned from deployment in a war zone who finds solace in crochet – there are real life examples of that, too.

Finding the balance between the old and the new for readers and editors is never easy. What appeals to one reader as quirky and interesting, may elicit the “never happen” response from others.  In The Man for Her, my editor questioned the heroine’s long mourning period for her lost lover.  Yet, in real life, Queen Victoria mourned the loss of Prince Albert the rest of her life.

For writers, the best advice is still to write the best story you can, be true to your own vision, and keep trying.  Fads may come and go, but good writing will endure.  Combine good writing with some off-beat characters and you could be the next “big thing.”

Now, I’m off to listen to some bagpipe music, it will lift my spirits and send me forth with determination and courage. 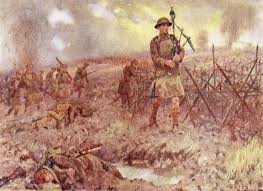 With Remembrance Day just past there have been plenty of stories for a history buff such as myself to read and contemplate. One of those stories involves James Richardson of British Columbia.

Young Jimmy was just 19 when he enlisted in the 72 Seaforth Higlanders of Canada. He went overseas with the 16th (Canadian Scottish) Battalion, Canadian Expeditionary Force, During the Battle of the Ancre Heights on 8 October 1916 at Regina Trench, Somme, France, the company was held up by very strong wire and came under intense fire.  Young Jimmy asked permission, then jumped out of his trench and played the pipes in full view of the enemy. Fired by his example, the Battalion forced its way through the wire and made it to their objective. Amazingly, Piper Richardson survived the battle. When the fighting paused, he acted as a stretcher bearer, bringing wounded comrades off the field. At the end of the day, he realized he’d lost his pipes. He returned to the battlefield to recover them and that was the last anyone saw of him. Jimmy Richardson  disappeared into the mists of battle.  He was awarded the Victoria Cross, Canada’s highest military honour, posthumously for “conspicuous bravery.”

It was believed his bagpipes had been lost in the mud but in 2002 they were discovered in Scotland. A British Army chaplain had found them and brought them home where they remained on display in a school where he taught.  The pipes were then returned to the Canadian Scottish Regiment (Princess Mary’s).

I first learned this story when our Victoria Symphony presented a Lest We Forget concert at the Bay Street Armoury in Victoria in 1914. “The Piper” composed by Tobin Stokes commemorates Richardson’s exploits and his tragic end. The presentation included film and readings as well as music and stands as one of the most moving Act of Remembrance services I have ever attended.

At this sombre time of year, Canada is once again preparing to send troops into troubled places around the world. They take with them an inspiring history of service and bravery. They also take with them the love and prayers of the citizens of the country they serve.  We wish them God speed, safe passage and the knowledge that they bring light and goodness into places of horror and evil. 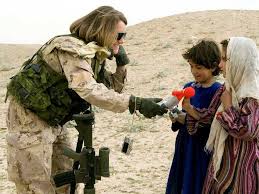