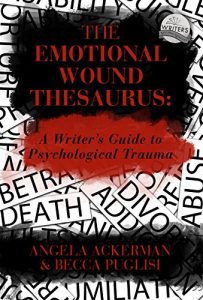 This week I discovered a new-to-me writing resource. It is called The Emotional Wound Thesaurus by Angela Ackerman and Becca Puglisi.

The author’s discuss the character’s development from the point of view of an emotional wound that occurred before the character ever appeared in your story.

The fact that people are shaped by their life experiences is not news but I like the approach taken in this book.  There are a few chapters discussing what an emotional wound is and how we all carry them with us for life.  The authors even warn aspiring writers to be aware of how delving into another’s wound may trigger a reaction in themselves. There is a chapter discussing how to brainstorm a character’s wound and another suggesting how various wounds may result in specific behaviours.

For anyone with a passing knowledge of psychology 101, there isn’t anything earth-shattering here, but the authors have geared their book toward helping writers and for me, that makes it particularly useful.  I already had a sense of my character, — name, age, physical attributes, goals – but I didn’t feel I knew her as well as I needed to.  Using the suggestions in The Emotional Wound Thesaurus, I began to dig deeper.  Why was my character a stickler for the rules?  Why had she emigrated to Canada?  What did she want besides the obvious, a home and a job?

While I pondered those questions, I read through the list of suggestions in the thesaurus and found several that sparked a plot idea.  So, without even applying the techniques described, the book had already helped me.

The “wounds” are arranged in categories, e.g. Crime and Victimization, or Failures and Mistakes.  Within each of these larger categories are individual possibilities.  For failures and mistakes, the list includes accidentally killing someone, or failing at school, or caving to peer pressure, to name a few.  My heroine had none of those burdens to bear but I could see her “failing to do the right thing” and/or “using poor judgement leading to unintended consequences.”

If you like charts and graphs, the book includes appendices with “a wound flowchart,” “a character arc progression tool,” and a “backstory wound profile tool.”  I generally panic when confronted with flow charts and the like, so I may not use these tools, but I’ll have a look around, just in case there’s a surprise.

This book is one of a series of  “Thesauruses” for writers.  Or is that “Thesauri?”  There is also a website Writers Helping Writers with loads of information and links to all kinds of other tools.  I’m really glad I found this resource.  Hope it’s helpful to you, too.